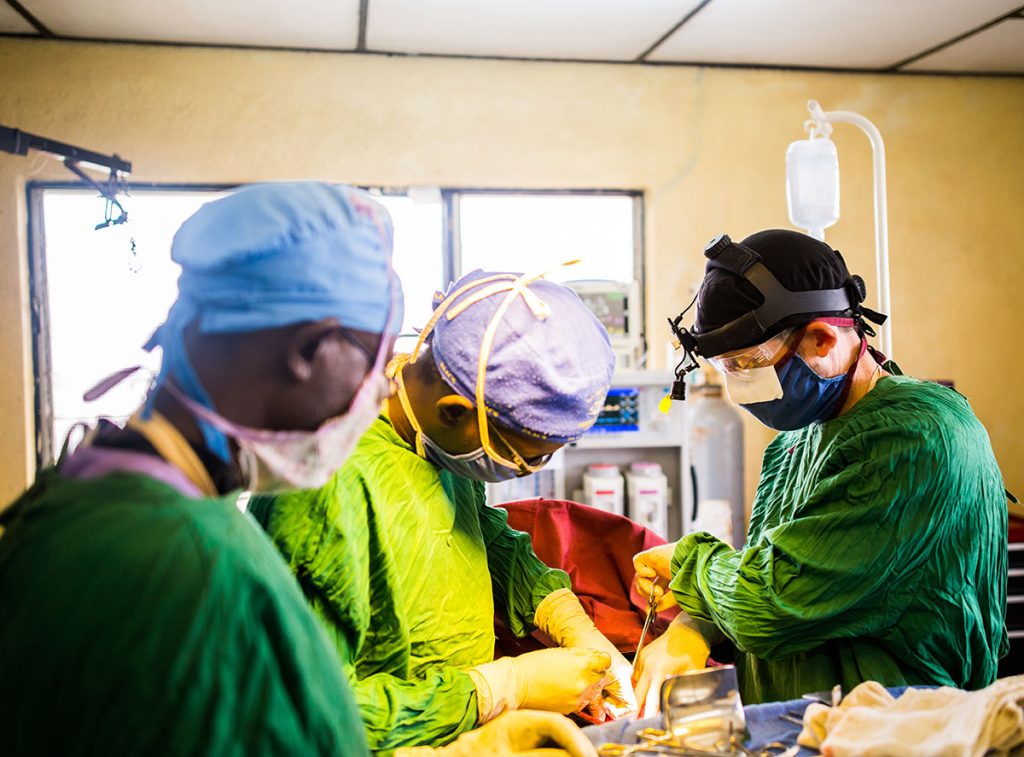 From Williams to Africa

A friendship born at Williams in the early 1990s has had a tremendous effect on health care in rural Africa. In December, a nonprofit founded by the two classmates announced the first winner of the Gerson L’Chaim Prize, a $500,000 award given to someone who moved to Africa to provide medical care to the poor—and who has been doing that work already for a considerable period of time.

Jon Fielder ’94 is a medical doctor and Christian missionary in Kenya, where he’s lived since 2002. Mark Gerson ’94 was trained at Yale Law School, now runs several businesses, and is a devout Jew. They met their freshman year, became close over long conversations at the snack bar, and stayed in touch through medical and law school.

Gerson says he was always impressed by Fielder’s intellectual curiosity and moral commitments. When Fielder took a year off from medical school to work with Mother Theresa in Calcutta, Gerson says, “his need and desire to serve the poor was an inspiration.”

So in 2002, when Fielder had completed his residency at Johns Hopkins and was planning to serve as a medical missionary in Kenya, Gerson made what would be the first of many philanthropic donations to Fielder’s work. “His donations to support HIV-infected patients at the hospital started before I even arrived,” Fielder says.

Gerson explains that even when he couldn’t give very much, he was committed to supporting his friend’s work, and he knew that “if Jon said my philanthropic dollars would have an effect, I could absolutely trust him.”

The problems Fielder faced in rural Kenya were enormous. When he arrived at Kijabe Hospital, deep in an escarpment in the Great Rift Valley, he was the only member of the staff who knew how to treat HIV. Medical supplies were limited, and the medicine that could prolong the lives of HIV-positive patients was impossibly expensive.

“Thanks to Mark’s early gifts, we were able to establish a subsidy program through which patients paid what they could afford, and the hospital paid the rest,” Fielder says. Within a few years, the U.S. President’s Emergency Plan for AIDS Relief provided those medicines for free, and Gerson’s gifts—along with those of others he and Fielder brought together, including Sean Fieler ’95—were directed at bigger-picture problems, such as a lack of facilities and trained personnel in the region.

In 2010, Gerson and Fielder established the African Mission Healthcare Foundation (AMHF). The AMHF has built clinics around Kenya and in other countries; established a medical-personnel training program; and supported other medical missionaries doing similar work to Fielder.

When asked why this type of philanthropy is so important to him, Gerson says, “The Torah tells us 36 times to love the stranger, and who is more of a stranger than people suffering from TB or AIDS or any number of disabilities in a rural African village?”

Since founding AMHF, Fielder has helped train thousands of physician’s assistants and nurses, who now work in clinics around Kenya and Malawi. “It is amazing to think that a dozen years ago, I was the only person at Kijabe who could treat HIV, and now there all of these people doing that work in clinics located much closer to where the patients actually live,” he says.

But the fact remains that in many regions, doctors like Fielder are the only health care providers for thousands of local residents. “It is obvious to me that the work these medical missionaries do is completely extraordinary,” Gerson says of the four finalists for the prize. “They have devoted their whole lives to it, they moved there and they don’t ever leave. But they don’t see themselves as extraordinary.”

Gerson and Fielder hope the prize, which will be awarded annually, brings recognition to the work these medical missionaries are doing and encourages others to donate.

“Resources for health can stretch much farther in Africa than they do in America,” Fielder says. “These doctors have been in Africa for a long time, the hospitals have been there a long time. Our focus is to support that kind of longitudinal institution building, because of the huge effects those institutions have on the populations they serve.”

This year’s winner of the Gerson L’Chaim Prize was Dr. Jason Fader, a son of medical missionaries and now on a team of American physicians in Burundi, the world’s hungriest nation.